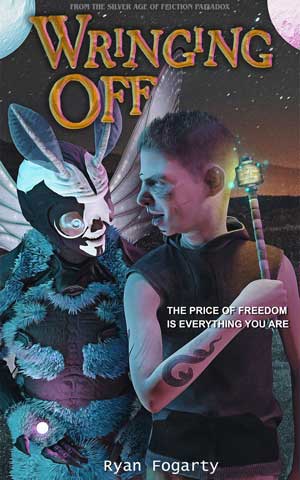 My story story Wringing Off is has finally been released in Alpha form. I say 'alpha' because one final round of spellchecks, indicia-modifications and a missing 'thank you' page need to be uploaded, but the changes are truly minor.  Once they go up in a few days I will consider the story 'fully live.'

As for the story itself...?  It's a Faction Paradox story!  Sort of. See, the core Faction Paradox mythos is owned by Lawrence Miles and you need permission either from him or Obverse Books to use them. Wringing Off doesn't actually use the Faction mythos though! It is a sequel to Lolly Eater by Janea Farris. With her permission, Wringing Off borrows a setting and a few characters from that story. 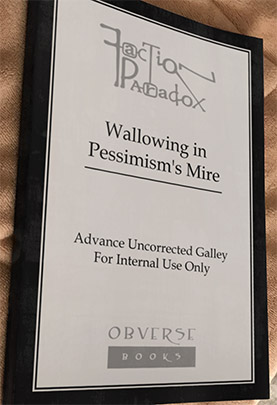 Nothing is ever simple with Faction Paradox. The anthology which Janea's story originally appeared in had to be pulped because of a copyright issue.  Until the copyright holders relent (or die, which considering their age in probably more likely) everything the book is stuck in publishing limbo by threatened litigation, including Simon Bucher Jones's wonderful 'Love During The Year Of Sandpaper,' a preview of which can still be read here. (Digital copies of the book can be found if you look hard enough.) As for the editing copy pictured here? I took that picture. *smiles*.

I rather liked Lolly Eater! It's a bit as though Geoff Johns wrote Therefore I Am, IG-88's story in the 1996 Tales of the Bounty Hunters Star Wars anthology. That story is infamously disliked by a wide swatch of the fandom so if you liked that story then I imagine you would quite enjoy Lolly Eater. Janea graciously granted me permission to use the setting from the end of that story for Wringing Off.

Wringing Off is the story of a boy, about 14 years old whose escape capsule lands on a very hostile, very alien planet. Cut off from every resource Pyke Xi-Roth must use his wits and stubbornness to try and find a way to escape and ends up wrestling with his own demons in the process.

The story is standalone and (fortunately) does not require having read Lolly Eater. I quite enjoyed writing it! This actually predates my story in the Lethbridge-Stewart anthology last year by several months, it has just been trapped in editing hell. Some elements have an unintentional autobiographic slant, in that it is about a character hitting rock bottom after a long downward slide. It also has some metastructural similarities to Robert E. Howard's first Conan story The Phoenix on the Sword in that it begins very late in the character's 'story.' So if any of that sounds intriguing to you, by all means check it out!

And when Wallowing in Pessimism's Mire finally gets re-published, buy it! It's really great and copyright trolling should always be met with financial support for the publishers.

Currently reading: 10,000 Dawns  (Yet another Doctor Who spinoff I had no idea existed.) 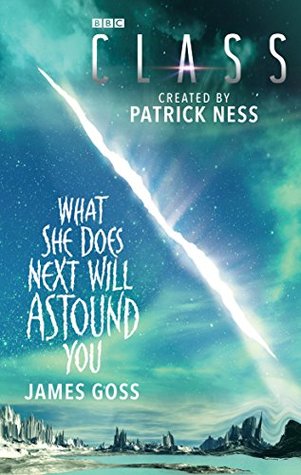 Class is was an odd duck.  The 2016 Doctor Who spinoff was essentially dead out of the gate thanks to BBC3's switch to an online platform.  Nothing short of a miracle could have saved the show.  And a miracle... did not appear.

But that doesn't really speak to the quality of the TV series, just its circumstances.  In practice the show itself was... uneven.  It was pitched as a 'sort of Buffy' series set in Coal Hill School, a location from the very first episode of Doctor Who which has periodically shown up since, most notably in the Series 8 and Series 9 of Doctor Who airing in 2014 and 2015.  2016 was a Hiatus Year for the parent show so Class should have been able to ride on the coattails of a fandom starved for new material.  Bluntly; the streaming platform was not kind to it and when it was rebroadcast on BBCOne it drew less than a million viewers per episode.

(I only caught up with the series in 2018, having tuned out after episode 3.  I was pleased/annoyed to discover that the series picked up considerably in episodes 4 and 5.)

All of which brings me back to Class - What She Does Next Will Astound You by James Goss.  A book which was published 5 days after the series premiered and written long before, possibly sight-unseen based on character descriptions and a few episode scripts.  So the only question should be... how bad is it?

This is where you can read part one.
It only gets nerdier from here.

Below are (most of) the shots from the "roadblocking" sequence:

I think what bothers me about the whole "Snowden" thing is that Obama doesn't even seem conflicted about it. As if there was nothing worth being upset about and the people complaining were just babies with no real understanding of how the world works.

I thought that sort of "certainty of vision" was being left behind with the old guy.

Everyone in Transformers fandom knows who these guys are:

In the second scene of the first episode of Transformers, waaay back in 1984 the Autobots Wheeljack and Bumblebee run a roadblock guarded by 3 Seekers,or Decepticon jets. What's interesting is that these Seekers change their color schemes between shots, going from being Starscream, Skywarp and Thundercracker to being these 3 guys in one shot. An obvious animation error, the cartoon was full of them, right? ...not so fast.

I've been doing up some Color Models again, so I decided to do the Generation 2 Seekers. (Decepticon Jets.)
There were 6 Seekers in the Generation 1 toyline, 3 classic-type and 3 "coneheads" that had different kinds of wings.

The Generation 2 toyline only released 2 Seeker toys; recolors of Starscream and Ramjet:

Story over? ...not quite. We've seen 4 prototypes for unproduced G2 Seekers that seem to have been slated for G2's 4th year had it not been canceled. And unlike Starscream and Ramjet they're new characters.
( Collapse )

These sexy 'bots are the Insecticons:

Back in the mid-1980's these guys were the height of cool. The Insecticons are the first Decepticon sub-group, sorta-counterparts to the Dinobots. They had boss matching color schemes, a separate command structure, and a completely alien modus opperandi that made cartoon episodes feraturing them (and there were several) very memorable.

From left to right they are Kickback, Bombshell and Shrapnel.

There's a Transformers iPad/Android mobile game out currently called Transformers Legends. It's a digital CCG whose in-game mechanics, focusing on upgrading cards, are absolutely irreconcilable with any in-universe logic.
...so of course I felt a need to reconcile them.
Setting based on last week's in-game event (themed card giveaway) of the same title.
Here's the event "poster" from the game:

Anyway, read on if you find this of interest!

If we spotted a killer asteroid heading for Earth today... the race to intercept it would be led by Russia, not the U.S.

This is a real picture of Mitt Romney. Look at it. look at it. Look at his head, the perfect lighting on his face, look at the size of it! That head is huge!

Ladies and gentlemen, it's time someone spoke up for the obvious truth we have been ignoring. Mitt Romney does not exist, he's just a stock photo model whose head is being photoshopped onto different photo ops. Badly.
Collapse